The Largest Miners’ Memorial in the World

June 10th 2019
There is now a longer walk to get to Guardian, please allow extra time for your visit and be extra careful as you now have to cross the road several times. 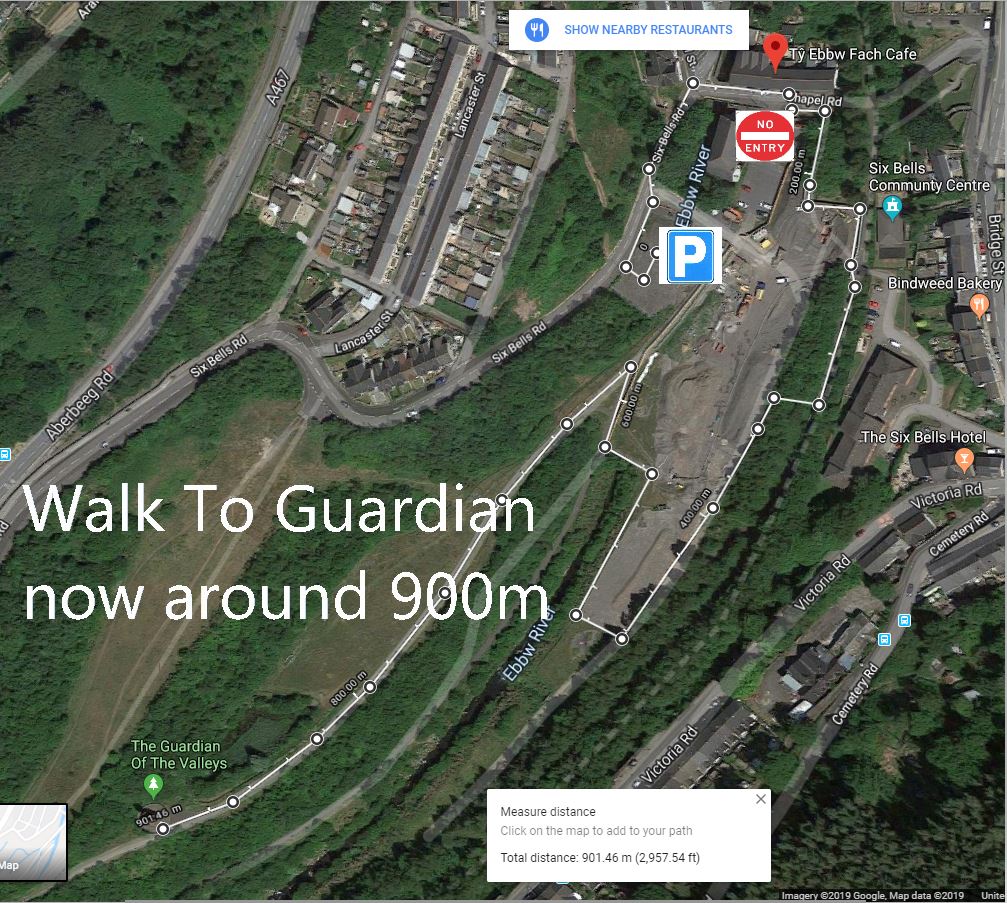 Designed and built by Sebastien Boyesen in 2010, and standing 20 mtrs high, Guardian is the tallest mining memorial in the World.  Erected in 2010 it commemorates the UK’s largest post-war mining disaster at 10.45 am on 28th June 1960 when 45 men lost their lives. Their names, nicknames and village are cut into a steel panel encircling the sandstone plinth. £220,000 was raised by local groups from various sources as well as Communities First and Blaenau Gwent Borough Council to cover the cost.

The detail in the facial features of the miner are quite remarkable, as is his muscle definition and curly hair beneath his helmet, even his trousers appear soft and flowing.

Sited in parkland, when viewed from a distance the figure has a transparent, almost ghostly quality, allowing it to blend into the landscape. As you approach he appears to grow solid and the true presence of Guardian can be felt.

This fitting tribute looks out over Parc Arrael Griffin, previously the Six Bells Colliery site, and provides an unforgettable and moving some may say spiritual experience for those who visit.

Access to Guardian is by foot or bicycle from the nearby car park. The well-maintained 300 metre pathway is tarmacked and at a gentle gradient, making it suitable for most people. Benches donated by family and friends of the colliers are situated alongside the pathway, allowing for the less able to take their time and enjoy the peaceful atmosphere. Site interpretation boards also provide an insight into the Colliery and the men who lost their lives.

Guardian was dedicated during a Commemoration Service on 28th June 2010 by the Archbishop of Canterbury, Reverend Rowan Williams, and later in November 2011, HRH Prince Charles visited Guardian and Ty Ebbw Fach.

More adventurous pathways lead along the 16 km Ebbw Fach Trail from Llanhilleth to Brynmawr, (once the valley railway line) which links several other industrial heritage sites. A footpath leads to Aberbeeg village. A trail passes through the village, providing a short circular walk back to Ty Ebbw Fach and the car park.

For further information please visit the Heritage Centre opposite the site or  check out www.guardianwales.info

Find us with what3words